On May 15th, New Century College (NCC) welcomed the 193 members of our class of 2014 into NCC Hall of Fame.  NCC’s convocation ceremony was an opportunity to celebrate both this year’s graduating class as well as the amazing achievements of NCC alumni who had walked across the very same stage over a decade earlier. 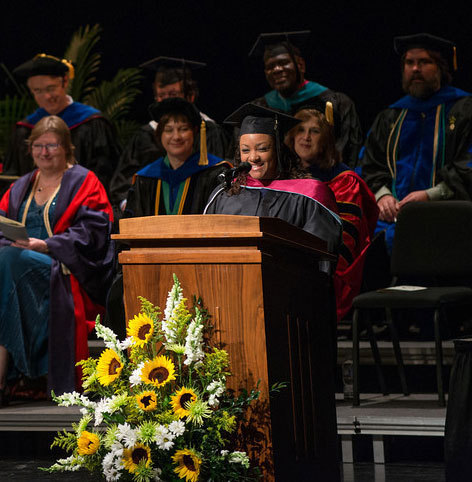 After a beautiful rendition of the National Anthem by Valeria Sierralta, Kara Hollis, and Ninoska Moratin of the Lupe Ladies, New Century College Dean, Lisa Gring-Pemble welcomed the audience with the inspiring stories of NCC Hall of Fame alumni like Jamie Konstas, Zainab Salbi, and Leonardo Pareja.  Dean Gring-Pemble also celebrated the achievements of several members of the class of 2014 including Emily Bonzek who, together with this year’s student convocation speaker Carolyn Schorr, founded the Invisible Children GMU Student Organization.  Bonzek and Schorr raised over $8,000 to build a rehabilitation center for people affected by the Lord’s Resistance Army in Central Africa and lobbied their congressional representatives in support of legislation to aid central Africa.

New Century College alumna Danah Telfaire, BAIN ’04, Health Education, spoke to the class of 2014 about her work within the challenging DC school system.  Danah is now the Regional Administrator of Assessment, Accountability, and Student Services for Imagine Schools.  In an inspiring speech, Danah discussed the challenges she faced as a young teacher in DC and how her education and experiences as an Integrative Studies major at NCC helped her to overcome those challenges and become a force of positive change for her students.

Selected for their strong interpersonal, communication, and academic skills, Envoys promote NCC and George Mason University by leading Admissions events, working with prospective students, and speaking about our programs in high schools nationwide. 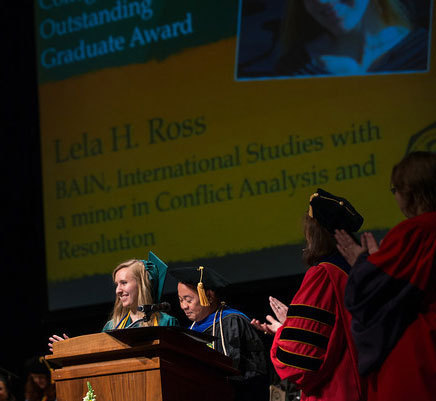 New Century College also presented two Outstanding Graduate Awards. The Outstanding Graduate Award recognizes excellence as reflected by academic endeavors, leadership, and service to the NCC and Mason communities.  Professor Al Fuertes presented the first Outstanding Graduate Award to Lela Ross, BAIN ‘14, International Studies with a minor in Conflict Analysis and Resolution, whose research project title, “Assessing the Conflict Resolution skills of First and Fifth Graders,” was accepted to the Clinton Global Initiative University (CGIU) 2014.  Lela will also be co-presenting a paper with Dr. Fuertes based on her research at the International Peace Research Association (IPRA) Conference in Istanbul, Turkey.

Professor Andrew Wingfield presented the second Outstanding Graduate Award to Caitlin Lundquist, BA ’14, Environmental Economics.  Caitlin is an Environmental and Sustainability Studies graduate who has made tremendous contributions to the sustainability efforts on campus including her work as the Sustainability Coordinator for Mason Dining and her service on the Patriot Green Fund committee that evaluates funding requests for student-led campus greening projects.  Caitlin also presented with professor Wingfield at high-level university events, offering a student perspective on sustainability at Mason.

The final two awards presented were the 2014 Awards for Academic Excellence.  These awards go to students who have demonstrated excellence in academics and scholarly activities as reflected in their grade point averages.  This year, two students, Sara Evers (BAIN ‘14, Curriculum Theory with a minor in Social Justice) and Winter Reyes (BAIN ‘14, Elementary Education with a minor in Childhood Studies), tied with an impressive 4.0 GPA.  Professor Suzanne Scott presented Sara with her award and NCC Assistant Kelly Dunne presented Winter with hers.

The 2014 New Century College convocation ceremony was memorable event that honored the achievements of our past alumni and graduating students and welcomed an inspiring class of students to the NCC Hall of Fame.

Photos submitted by the Class of 2014