A George Mason University team is launching a crowdfunding campaign on Monday, April 14, 2014, in order to raise money for a documentary that could help save the culture and land of a native Peruvian group. The Maijuna Film Project team, led by New Century College (NCC) professor Michael Gilmore, is using the online social media platform Indiegogo, which is dedicated to helping organizations raise money from many funders who pledge as little—or as much—as they can afford. Contributors can help by visiting the Maijuna Film Project Indiegogo site.

The Maijuna, an indigenous group in the northeastern Peruvian Amazon, are completely dependent on their ancestral land for survival, and face the danger of losing their land to government officials who want to build a road that would destroy almost a million acres (22% larger than Yosemite National Park) of this untouched, primary rainforest. In addition to causing massive deforestation, construction of the highway would provide access to an influx of colonists intent on cultivating the land for their own profit. Eventually, the Maijuna would be deprived of their livelihood and traditional culture.

With the help of NGO Rainforest Conservation Fund, Gilmore’s Maijuna Film Project team is working with independent documentary filmmaker Jake Wagner to create a video to raise awareness about the Maijuna’s struggles.

Excited to make a film with a potential positive global impact, Wagner said, “We are going to the Maijuna’s home in order to help them tell their own story in their own words.”

One of the students included on the team is Will Martinez, a Mason student passionate about film and photography.

“I have worked on a variety of film projects over the years, but none as exciting and worthwhile as this one,” Martinez says. “I will also be using knowledge gained as a marketing student to help spread the word about the film after it’s completed.”

Those pledging to help try to preserve the land of the Maijuna—either by contributing through Indiegogo or working on the film project itself—also have the opportunity to effect a positive environmental impact: the Amazon’s dense rainforest is considered central to combating global warming and protecting the many species of plants and animals found only in the region. 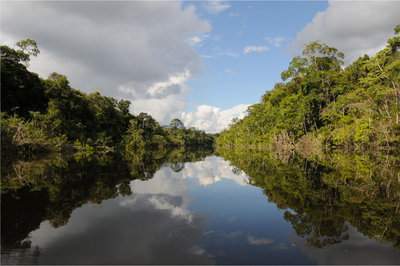 Maijuna river surrounded by primary rainforest. The Maijuna are fighting to conserve their
traditional lands for their children and future generations. Photo courtesy of Mike Gilmore.

Tyler Orton, Mason Office of Sustainability program coordinator and an NCC senior, is traveling to Peru in order to assist with the film’s sound production.

“The Maijuna film project allows me to use all of the skills I’ve developed during my time at Mason—recording skills developed in the music school, conservation knowledge learned in NCC classes, and project management experience gained on the job—in order to join the fight for global conservation,” he says.

Gilmore has been a champion of the Maijuna for the past fifteen years, and since joining NCC as an assistant professor in 2008, he has brought over twenty Mason students and faculty to Peru to work on community-based projects; one such project, Amazon WaSH, is focused on clean drinking water, sanitation, and hygiene—crucial to improving the health of the community’s youngest and oldest members.

“The work that Professor Gilmore, his colleagues, and his students are doing with the Maijuna shows the powerful potential in Mason’s ambition to be a university for the world,” notes Andrew Wingfield, Mason’s sustainability studies fellow and an NCC associate professor. “By helping the Maijuna improve community health and protect their ancestral lands from which they derive material sustenance and cultural identity, he and his team are working to ensure the sustainability of a vulnerable people. The relationship is reciprocal. Students who return from project trips…speak proudly about what they taught the Maijuna, but they [also] truly marvel over what the Maijuna taught them.”

“This is a community-driven idea and project to help the Maijuna in their struggle to defend their land and preserve their culture for future generations,” Gilmore says. “There is a moral imperative for us to act when people’s basic human rights are in danger, yet they don’t have resources to act on their own.”

How you can help: Spread the word about this project and go to the Mason Maijuna Project Indiegogo site to contribute. Even the smallest donation will make a difference.