Mr. Steven A. Sultan and Mrs. Susan E. Sultan established the Jon Sultan Writing Award in memory of their son, Jon, who was an integral part of the first Integrative Studies cohort in 1995. School of Integrative Studies (SIS) will present the Jon Sultan Writing Award to a first year student who shows exceptional talent, versatility, and potential as a writer. The Sultan Award winner receives $1000.00 and a certificate at an award event at the end of the spring semester.

The 2017 Jon Sultan Writing Award goes to Andrew Huang, who is pursuing a B.A. in Integrative Studies with a concentration in Elementary Education. Andrew is working toward an accelerated Master's degree in the field as well. Andrew enjoys meeting new international students to learn about their different backgrounds, but also to find what they have in common. GMU's diverse campus is a great place to do that! He loves working with children, and teaching is something he can see himself doing for a long time - whether it be here in Virginia or abroad in Asia.

For this award, Andrew used his synthesis paper from INTS 101 which sheds light on the problematic 'model minority' stereotype of Asian Americans and how it downplays the discriminatory issues faced by these men and women, particularly in the office environment. His Individual Ideological Analysis of Media paper from INTS 203 scrutinizes the ideology (that money can buy happiness) behind a 2012 Tokyo Disneyland commercial and how it appeals to its target audience of young girls. Also in his INTS 203 class, he made use of what he learned in class to analyze the powerful messages conveyed by the collection of photographs in the Newseum’s Pulitzer Prize Photographs Gallery and the impact of the East German government’s control over its media. Huang also connected the central ideas of four media sources he chose and viewed with concepts from class readings and discussions.

Congratulations to Andrew for his 2017 award and excellent writing!

Winners of the Sultan Award from the past three years are now using their writing skills to earn them research grants! Alicia Rodriguez (2016 winner) and Olivia Stanford (2014 winner) have both applied for and won a grant from the Office of Student Scholarship, Creative Studies, & Research Activities (OSCAR) and Sylvia Barely (2015 winner) is in the process on preparing her proposal now. Associate Professor, Cher Chen, has been a mentor and inspiration to these three young ladies. 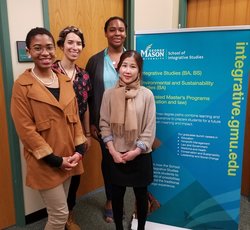 Alicia, a double major with Film and Video Studies and Integrative Studies with a concentration in Social Justice and Human Rights, will be conducting an interview study about the viability of biocultural rights for indigenous peoples in Borikén (Puerto Rico). Biocultural rights are a method of observing the inherent link between the environment and culture, and this is a relatively newer model in the field of indigenous rights. Because of the stagnation of other methods utilized in the Indigenous Rights Movement, biocultural rights might provide an alternative approach towards addressing issues that have not been met through treaty rights, land claims, or similar. Speaking to indigenous peoples themselves about the concept of bioculture and efficacy of this approach is the integral first step in a longer process that her research will be focusing on.

Olivia, a International Studies concentration student, will be focusing on maternity protections, specifically the laws and services offered to mothers/pregnant women who work in jobs that do not guarantee benefits or protection under law (cleaning women, migrant workers, etc.). She conducted research last year, but plans to adjust a few things before trying again.

Sylvia, also pursuing an International Studies concentration,  will focus her main research interest in women's rights across the globe. Her latest research pursuit with Professor Chen has been on Media Coverage of the Rwandan Genocide.

We are very proud of the excellent writing that has come from our Integrative Studies students and hope this award opportunity can enrich the lives of many students in the future.